A honeymoon to remember! 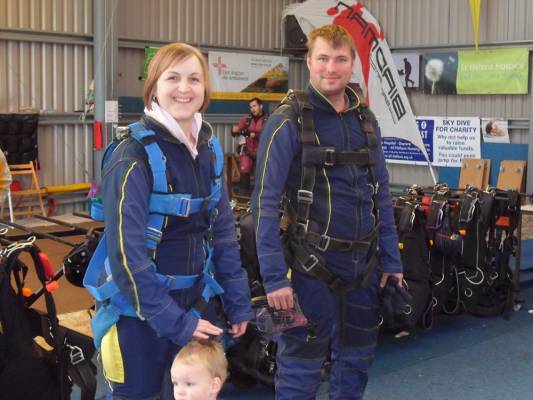 On Friday 27 April our manager Paul, and his new wife Gemma, completed a skydive to raise money for charity Help for Heroes in the name of Courtney Fraser, whose father was seriously injured in Afghanistan and is now unable to serve.

They were up bright and early for an 8:30 start at Beccles Airfield, where they received training and some health and safety guidance.  Then they were strapped to their instructors and ready to go; in fact Paul and Gemma had the skies to themselves that day because of the unfavourable weather conditions.

The couple decided on a tandem skydive instead of an expensive honeymoon, as it would have meant leaving their 16-month old son Zaviar behind.  Gemma said, “We decided to do it because it’s a once in a lifetime experience and it was for a very good cause.  It was strange because after you jump out of the plane, you don’t feel like you’re moving at all. You would have thought being strapped to a complete stranger then jumping out of a plane at 10,000 feet would be really scary, but it wasn’t too bad. What stuck in my head was the eerie silence, and the fact that it was freezing cold!”

They were given the chance to steer their own parachutes, which Gemma aptly described as “trying to hold on to an umbrella in the wind.”  She landed safely in the field, but there was no sign of Paul. It turns out he had landed in a completely different field – and men say women are bad drivers!

The couple raised £215 for Help for Heroes and adrenaline junkie Paul wants to do a bungee jump for their next fundraising event.  Lucky Gemma.