Want the most reliable car on the planet? Buy a Japanese car

It’s fairly safe to say that, given a healthy lottery win, we’d buy a new car (to go with the new house) and we’d probably choose a car that came from Germany or Italy. Agree?  Something that has a satisfying clunk when you close the doors; that purrs along but can turn into a panther if you need the speed? Well just in case you don’t get that lottery win, and that you have to watch your pennies because money’s tight these days, you really ought to know what kind of car will get you from A to B reliably all the time.  And it doesn’t come from Germany or Italy or even England; it comes from Japan.  In a survey conducted by What Car? and Warranty Direct, experts examined the warranty claims of 50,000 three- to eight-year-old vehicles across 38 car marques.

For the eighth year running Honda is at the top of the list of ten most reliable cars on the road; it’s also the cheapest to fix if one did break down.  In fact seven of the top ten are Japanese, Hyundai’s from South Korea, and Ford and Chevrolet are the only two to break the dominance of the Far East.

The highest polling British brand, coming in at 24, is Rover, which went bust in 2005! Luxury brands Bentley and Land Rover are the least reliable, so you could save yourself even more money by avoiding them.  Mind you if you can afford a Bentley, you probably aren’t too worried about the running costs involved.

Chas Hallett, editor-in-chief of What Car?, said: “Honda’s success is down to low failure rates. Manufacturers at the bottom of the table could learn from their Japanese counterparts.” 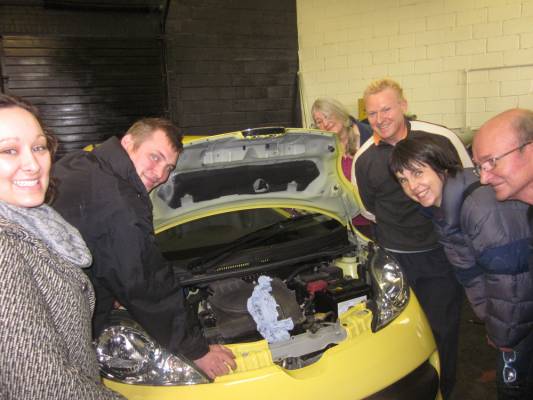 Paul Miller, manager at John Austin, has done it again!

On a blustery February morning, we abandoned our Saturday morning lie-ins to attend his Pit Stop Workshop.

The Pit Stop Workshop is designed to reduce the fear of basic  maintenance through familiarity.  It gives people the confidence to know that if they are stranded with a flat tyre and the phone’s dead or there’s no signal, they can handle the situation.  As this is not covered in driving lessons, it’s a good opportunity for those learning to drive to come along and give themselves a head start.  On this occasion most of us were seasoned drivers, but we all found we had something to learn!

With the complexity of cars these days, fiddling about under the hood, unless you really know what you’re doing, is to be discouraged.  This has, inevitably, led to many of us becoming complacent about dealing with the most simple of car care basics, relying instead on the annual service.   But often it’s those simple things that we can all do something about but don’t, that can help us avoid expensive repair bills later on.

Our reliance on breakdown services means we could sit on the side of the road for hours with a flat tyre too waiting for help which, if it was a lovely sunny day might not be so bad.  But if it was like a day like today, you’d want to be able to do something about it, and we all felt after two hours’ ‘training’ we could.

Not only did we all gain knowledge and insight, but we were able to relax and chat about our experiences afterwards over coffee and cake at The Food Company next door.

The team at John Austin have three more Pit Stop Workshops lined up this year:  Saturday 12thMay, Saturday 11th August and Saturday 17th November.  If you’d like to come along or have a question, call Paul on 01206 211483 or email .

Car safety – are you in the dark?

Road safety awareness has come a long way in recent times and whereas previously we may have bought a car because of its style, speed, functionality and perhaps even its pulling power,  now safety has become a major consideration when making that all important purchase. For this reason car manufacturers are constantly striving to improve their safety systems and come up with the latest innovations to get ahead of the pack.

Considering that it was a Volvo engineer who first invented the seat belt back in 1959 it is no wonder we’ve come to regard Volvo as synonymous with safety. For many years they have focused their marketing campaigns on the safety features of their cars and promoted themselves as making ‘the safest cars in the world’. However last year Toyota successfully took them to court and it was ruled that these claims were ‘misleading and lacked supporting evidence’. So have we been hoodwinked?

Let’s take a look at the evidence.  The most widely recognised safety testing is performed by Euro NCAP. They perform independent assessments of cars sold within Europe and award stars based on the safety of their performance in crash test situations.

In a press release Euro NCAP disclosed their top five overall achievers; Volvo didn’t put in an appearance until ‘joint 5th place’ receiving only three out of a potential five stars. Volvo was preceded by VW Golf, Honda Insight Hybrid, Toyota Prius, Hyundai i20. So it does seem that the public perception of Volvo may be somewhat misguided.

The tests cover all aspects of a car’s safety performance from frontal impact and side impact to child, driver and pedestrian protection. They are considered exhaustive by most; however some believe that other more unusual factors also come into play.

Believe it or not there have been several studies carried out worldwide to try to establish the safest colour car to drive! So does colour play a part in how safe a car is? Well according to the various experiments conducted it absolutely does.

It is apparent time and time again that silver is safest. In almost every study silver cars come out as least likely to be involved in an accident.  The reason for this (here’s the science bit) is because silver has highly reflective qualities and is not a colour that occurs naturally in the environment.  It therefore easily attracts our attention and stands out against the black roads or at night time, reducing its chances of being involved in a collision. The same can be said of white and other light coloured vehicles. Darker colours such as black, dark blue and bottle green cars are all thought to be at a greatly increased risk of being involved in more serious accidents.

It does appear that there is more to consider when buying a car than air bags and NCAP stars, although perhaps the most important safety feature is the one ‘behind’ the wheel.

Everyone in the John Austin team loves cars; we take pride in our work but the one thing that really gets us is when we can’t take care of our customers’ cars as quickly as we’d like to. It disappoints us and it disappoints you. It’s not that we don’t have enough man power, we do; we just need extra space for ramps.

The good news is that the problem has just been resolved. A few weeks ago we moved into the unit right next door to the garage, and kept the original workshop too, which means we’ve doubled our space and can install two more ramps. Two more ramps will allow us to service and repair another 30 cars a week, so waiting times will be reduced as will the inconvenience of being without your own car.

We’re getting everything ready so we’ll be fully operational by the end of this month. Of course we wouldn’t dream of doing something like this without marking the occasion, but we also wanted to do something a little different. So, on Saturday 9 October at 10.00am we’re running a Pit Stop Workshop. This workshop will give our customers, their families and friends a hands-on opportunity to learn how to change a wheel (if they’ve got one), check tyre pressures and oil and water levels. The aim is to develop familiarity and reduce fear through active participation. Yes, anyone coming along will have a chance to literally change a wheel or put air into a tyre if they want to. If they don’t, they can watch. It’s all god experience. Year 12 and 13 students, who are just starting driving lessons, are also being invited to get involved.

Basic car maintenance seems to be a forgotten art these, so it’s quite easy for simple problems to take on sinister proportions or be ignored altogether. This workshop is designed to give you the skills to help yourself, because one day you might need to.

When the workshop’s finished, we can all go next door to The Food Company for a little coffee and cake, compliments of John Austin. If you’d like to come along to the Pit Stop Workshop, just email Sharon on: to reserve your place, or call 07811 439269.